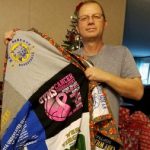 In part two of his story, community member Coachestep talks about the events following his initial prostate cancer diagnosis and his deciding on his treatment plan. Read part I here.

Next came the biopsy…

Next was the biopsy by Dr. James Jensen. Dr. Jensen was a highly respected doctor at The Edward’s Comprehensive Cancer Center, which is attached to Cabell Huntington Hospital. His assistant Mark had me undress completely and put on a hospital gown. Dr. Jensen came in and performed a digital examine of my rectum. As soon as his fingers entered he said, “Oh yes Mr. Estep! You feel that?” And indeed I sure could feel a big knot.”How about that one, can you feel that one?” I could sure feel that one also and it was huge.

If you have never experienced a biopsy of the prostate, you are in for a real treat. You lay on your side and spread your legs so the doctor can access your rectum. I had never been so embarrassed in all my life. I am a 30 year plus veteran of the school system as an educator and a coach. I had never been exposed to such an embarrassing procedure.

I was still trying to find some dignity during the beginning of the biopsy when in walked two female doctors. As Dr. Jensen begins to insert the tool to remove the 12 biopsies, yes that is right 12, I could feel him pull my cheeks apart and ask the ladies in the room, “Have you ever seen two tumors this big so close to the outer portion of the rectum” or something to that effect.

Dr. Jensen continued to clip away at my prostate as I heard him instruct, “Mark, get on the phone to Mr. Estep’s insurance. Tell them I want to do the Lupron shot today. There is no use to wait, we must get started now.”

I was never so relieved as when the two female doctors left the room and we neared the end of the 12 biopsies. As we finished, Mark told me to get dressed and come with him to a room right next door. After waiting for a long while, Dr. Jensen appeared with a rather large needle, “You wanna’ hold this Mr. Estep?”

Following my Lupron shot, we met for a short time in Dr. Jensen’s office as he explained what we were going to do to battle this cancer. For his part, we would be utilizing the Lupron shots every six months. We would continue the Casodex until I met with Dr. Omer Jamil. His office would schedule me an appointment with the Radiology Department to treat my two most painful areas. And finally, he would contact me asap upon the return of the results of the biopsy.

The strange thing, the very day I was diagnosed with this cancer I could not sleep at night. Not a single wink. My mind raced nonstop about how could this have happened and I need every single piece of data I could find on this disease. I do not remember sleeping one night for nearly two weeks.

We have some work to do

Dr. Jensen brought me back in to review the results of the biopsy. “Nine of your 12 biopsies show extensive cancer and the other three show tiny bits of cancer,” he reported. “We have decided there is no use in removing your prostate, the cancer is too far along at this point!”

“It is an aggressive cancer and we have to get started right away Mr. Estep,” he insisted.
My oncologist assigned was Dr. Muhammad Omer Jamil, Edward’s Comprehensive Cancer Center. I liked Dr. Jamil immediately, as he was a straightforward kind of doctor holding no punches.

“Mr. Estep, your complete bone scan shows the cancer has moved into numerous bones throughout your body. In your ribs, clavicle, sternum, all throughout your back, and it says here on the report ‘locations throughout the pelvis, hips, and lower back too numerous to count!’ So we have some work to do!” he informed.

“I think I can get you into a trial that is starting soon for your chemo and we will start first with radiation to the sternum and the mid-back to help relieve some of that pain you are reporting,” he continued.

Next, I was scheduled to have a medi-port surgically implanted in the front of my right clavicle just beside my neck. This was a rather painless procedure as I was put to sleep for this to be performed.

Read the full series from coachdestep: