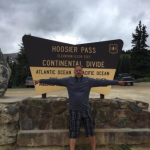 Editor’s Note: This article discusses severe depression and suicidal thoughts. If you or a loved one are experiencing suicidal thoughts, please text or call National Suicide Prevention Lifeline at 1-800-273-TALK or visit their website.

Freedom before the regret

Back in September of 2000, Kevin Hines had had enough. He was struggling with bipolar disorder, which caused depression, delusions, and paranoia. His life had spun out of control, and he decided that the best course of action was to end it all. So he walked out on the Golden Gate Bridge and jumped.

As soon as his hands left the rail, he felt something he did not expect. Instant regret. As he plummeted the 4 seconds that it takes to fall from the bridge to the water below, he realized that he wanted to live. He realized he made a mistake. The problem is, jumping off the Golden Gate Bridge is not a very survivable activity. Since it’s opening back in 1937, over 1700 people have jumped off the bridge, and only 25 have survived. If you survive hitting the water at around 75 miles per hour, you’re still gonna be in pretty bad shape, and then drowning becomes a real possibility. He was in a lot of trouble.

I wasn’t worried about my PSA

If you read my last blog you know that I didn’t have that kind of instant regret that Kevin had as he was falling towards the San Francisco Bay. It didn’t even feel like a suicide attempt. When I stopped my treatments for my advanced prostate cancer, it felt like freedom, and it felt like I was getting my life back. But that feeling would change.

I had an appointment in January of 2018 with my general practitioner for my annual physical. I hadn’t had a PSA test for about 10 months, and none since suspending the drugs that were keeping that number low. I knew that most likely my PSA would rise, but after only 7 months, I didn’t think it would be too bad. My urologist had previously had me on intermittent therapy, and back in 2015, I was off the drugs for a year. My PSA had risen from undetectable to a 7, a pretty significant jump, but the scans had all come back clear. I wasn’t that worried about it.

I was at work the day after my appointment and noticed I had an email telling me that my latest results were available in my patient portal. I walked over to a break area to check it out. I brought up the portal on my phone, scrolled down, and saw my brand new PSA number.

My PSA had rocketed up from undetectable to a 43. It had never been that high, even when I was diagnosed. As I sat in disbelief looking at that number, I realized that there was a pretty good chance that my cancer had spread, that there was also a chance the few cells that were in my bloodstream had coalesced into a tumor, and maybe more than one.

You know that feeling Kevin Hines had when his hands left the rail of the bridge? I had that exact same feeling when I saw the number. Instant regret. What did I do? Wait, I don’t want to die. I want to live.

Over the next few days, my suspicions were confirmed with CT scans and a bone scan. My prostate cancer had indeed metastasized, and I had 4 brand new tumors in and around my prostate bed. I also had one in my abdomen.

How my family and friends reacted to this news, and how my fight for life continues will be in my next blog.