What Is the PSA Test?

A common method used to screen for the possibility of prostate cancer is the PSA test. PSA, or prostate-specific antigen, is a protein made by normal prostate cells and cancerous cells in the prostate. When a man’s PSA level is higher than usual, it could be indicative of prostate cancer. The PSA test is not used as a diagnostic procedure, but can be used in combination with other screening methods, such as the digital rectal exam (DRE), to alert your provider of a potential problem. If your doctor suspects that you may have prostate cancer, they may recommend more invasive screening or diagnostic measures such as a transrectal ultrasound, a prostate biopsy, or other imaging techniques like MRIs or CT scans.

What is a normal PSA level?

The definition of a normal PSA level may vary based on a variety of different factors. PSA levels are often measured in ng/mL (nanograms of PSA per milliliter of blood). Typically, a result of 4 ng/mL or lower (sometimes referred to as a PSA level of 4), is considered normal, however, your doctor may want to pursue additional screening even at lower levels if you’re at an increased risk of developing prostate cancer based on your family history, race, or other behaviors such as smoking.

Conversely, some doctors may not move on to more invasive diagnostic or screening procedures at levels higher than 4 ng/mL, if they believe your PSA level might be impacted by other factors. If you test at a high PSA level, typically between 4-10 ng/mL or beyond, your doctor may recommend immediate repeat testing to strengthen the results found, or may choose to have you come back later on to see if your PSA is consistently rising over time.1-4

What are the potential benefits of the PSA test?

The PSA test has the ability to indicate that a man has prostate cancer very early on. This could help reduce the number of advanced prostate cancer cases, as well as reduce the death rate from prostate cancer. Screening recommendations may vary, but some guidelines suggest that all men over the age of 50 should be screened annually using the PSA test, and some individuals may need to be screened even earlier if they are at a higher risk.

The PSA test was previously used in the 1980’s as a means to track prostate cancer progression in those already diagnosed, but was approved by the FDA in the 1990’s to be used as an early detection method. Also, PSA testing can be used for men who have already been diagnosed or treated for prostate cancer to determine if the cancer has recurred or if treatment is working.1,2

What are the potential limitations of the PSA test?

With earlier or more frequent testing PSA testing, it’s not a surprise to learn that more men are undergoing further, invasive diagnostic procedures, including prostate biopsy. Prostate biopsies involve taking tissue samples from the prostate using needles, which can cause pain or bleeding, as well as carry a risk of infection. A man’s PSA level can fluctuate, even on a daily basis, because of a variety of factors, causing some men to have a higher or lower PSA level than normal, regardless of if they have the cancer or not. Factors that can cause changes in PSA level include, but are not limited to:

Since PSA levels can fluctuate, men with prostate cancer can sometimes test at lower or normal PSA levels, while men without prostate cancer may test at higher PSA levels. This can lead to men who need more invasive diagnostic procedures to not get them, while men who don’t need them but are receiving them are at risk for complications related to these procedures.

It has been estimated that only 25% of men who have an elevated PSA level have prostate cancer, while 15% with lower or normal PSA levels that wouldn’t require further testing actually have the condition. Additionally, men who receive false-positive PSA test results and undergo invasive diagnostic procedures that are negative for cancer can develop anxiety, fear, and other emotional struggles worrying that they have cancer that is avoiding detection.1,5-7

What else should you know about PSA test?

Also, as mentioned earlier, more men are being diagnosed with early prostate cancer due to the rise of frequent PSA testing, and many of these men are undergoing treatment that can carry along with it serious side effects. Some of these may include infertility, erectile dysfunction, urinary or bowel incontinence, mood changes, and more.

Although it may seem smart to treat prostate cancer immediately upon detection, in many cases, the prostate cancer is so slow growing, or the man diagnosed is at an advanced age, that the cancer may never reach a point of being life-threatening. In these instances, early screening methods leading to invasive treatment may produce quality of life-impacting side-effects and the loss of money and time. In these cases, a treatment approach called active surveillance or watchful waiting may be indicated.

Several public health entities have analyzed the long-term outcomes of PSA testing, to determine their impact. For example, the U.S. Preventive Services Task Force determined that for every 1000 men between the ages of 55-69 years’ old who received PSA testing every 1-4 years for at least 10-15 years, only one death was prevented. Additionally, it was reported that hundreds of men received false-positives or treatment that was unnecessary for the stage and aggressiveness of the cancer found.8 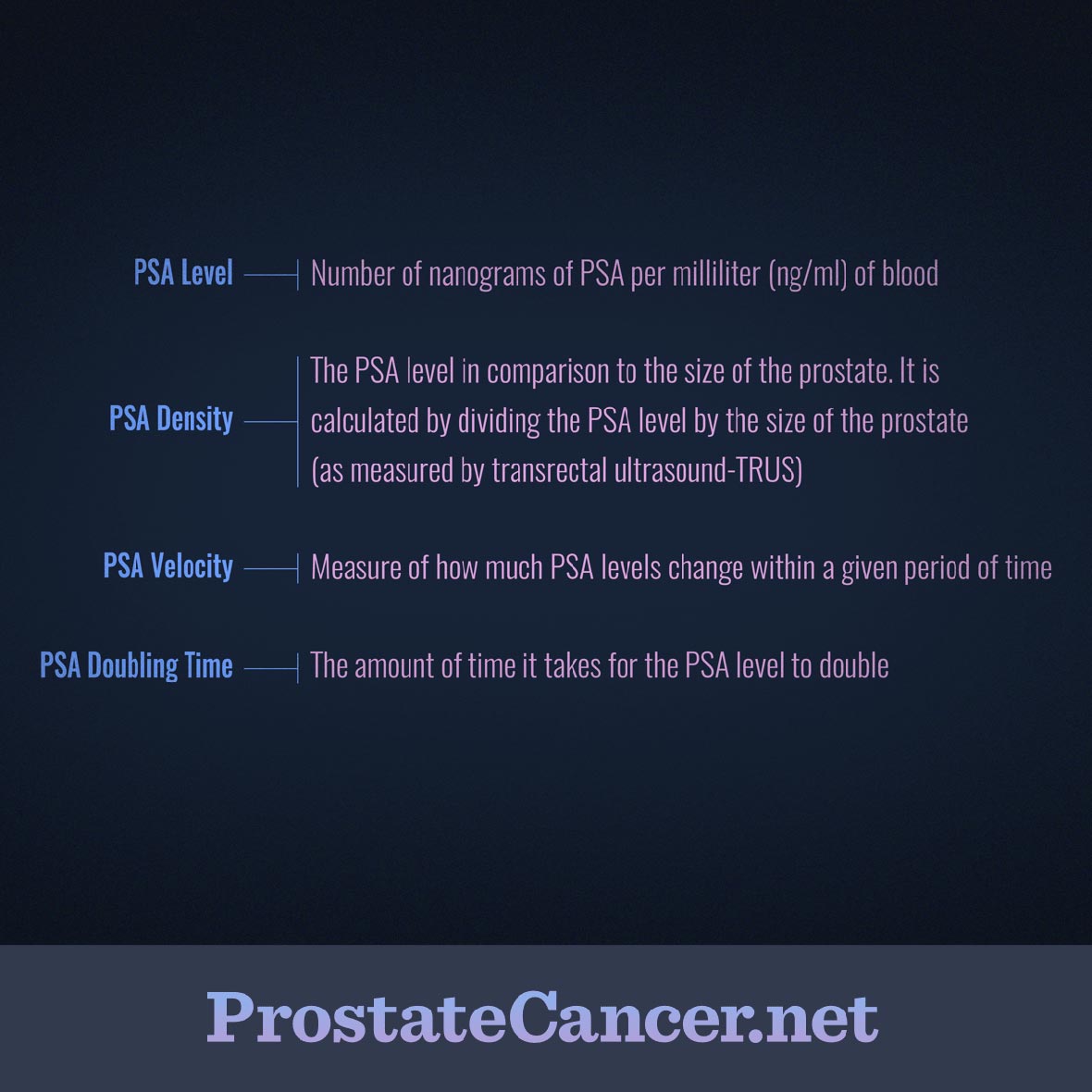 Since there can be such ambiguity and not as much benefit as hoped when using the PSA test without additional testing, research is ongoing to improve the specificity of the test, as well as to find ways to determine the likely aggressiveness of the potential prostate cancer found. Some examples of PSA test differentiation and other new screening methods that are being used or studied include the free vs. total PSA test, the PSA density of transition zone, age-specific PSA reference ranges, PSA velocity or doubling times, Pro-PSA, IsoPSA, using the PSA test with other biomarkers (indicators of cancerous processes going on in the body), the Prostate Health Index and the 4K Score test.1,3

More research needs to be conducted before determining that any of these mentioned tests are more efficient or useful than the current PSA test. Your doctor will help you determine if a newer testing option is appropriate for you, and what your PSA test results could mean.