Pickleball, My Platform for Prostate Cancer Advocacy — Part I 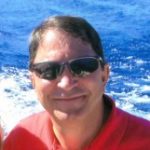 “Circumstance does not make the man, it reveals him to himself” -James Allen, As a Man Thinketh

Once you survive prostate cancer, you’re ready to take on most anything, especially things that are challenging. If you’ve faced a death sentence and made difficult choices in terms of treatment options, which in my case meant entrusting my privates to the persistent probing of a daVinci® robot, then you’re suddenly full of confidence once your life is handed back to you.

For example, a friend of mine took up competitive cycling by buying a $1,700.00 bike prior to daVinci® surgery. Another friend who at age 65 said “screw it,” retired and travels with his wife, spending time with his grandchildren, and playing golf with his buddies. Another retired from a career of flying for a major airline and has written two fiction books.

I decided to write a book and along the way became passionate about Pickleball, a sport with a wiffle ball and paddle on an abbreviated tennis court played like a chess match. Pickleball is a paddle sport that is a combination of badminton, tennis, and table tennis. Two or four players use solid paddles made of wood or composite materials to hit a ball, similar to a wiffle ball, over a net.1

Congressman Joel Pritchard, Barney McCallum, and Bill Bell invented the game of pickleball one summer afternoon in 1965 on Bainbridge Island, WA. It’s a racket sport on a smaller court than a tennis court.

At the net, there’s an area called “the kitchen” a sort of minefield that players cannot enter unless the ball lands there. Only then after it bounces can you step into the kitchen dink (soft hit) the ball back to your opponent. New players are often chided by veterans “you’re in the kitchen”, and “get out of the kitchen” You lose the point or the serve if you’re caught in the kitchen. Very annoying but a nuance of the sport.

OK, OK what’s with the name? It’s a simple explanation. The Pritchards had a cocker spaniel named Pickles, who became interested in this new game. Whenever a ball would come his way, he would take the ball and run off with it, because you see, it was Pickle’s ball. And that is how the game got its name. And the USA Pickleball Association is sticking to it.

My love for the sport

Pickleball lets men in their 60s, 70s, even 80s display their manhood by beating a little yellow ball into submission (along with their opponents). It is also where men who have or survived prostate cancer find normalcy in competition without regard to a diagnosis that doesn’t always make sense.