Can Prostate Cancer Be Detected Early?

Screening involves checking for a condition when the individual screened may not currently have symptoms for the condition. Screening, in many instances, is used to detect for the presence of a specific condition early on, when, if discovered, treatment can be more effective and decrease the chance of serious health complications or even death.1

Perhaps one of the more troubling characteristics of prostate cancer is that common signs and symptoms of the condition typically do not appear until the cancer has grown substantially, or has progressed beyond the prostate. Early prostate cancer is essentially asymptomatic, meaning it has no symptoms. The most effective way to catch prostate cancer early on, is to visit your doctor regularly to discuss your risk of developing prostate cancer, as well as to determine what screening options may be appropriate for you.

These screening tests most commonly include the prostate-specific antigen (PSA) test or a digital rectal exam (DRE). These screening tests are often done when a man is 50 years old or over, or may be done for younger men depending upon symptoms that you might describe to your healthcare provider. If your doctor suspects that you may have prostate cancer, they may recommend that you receive a prostate biopsy or have imaging tests done such as MRI, CT, or ultrasound images.2 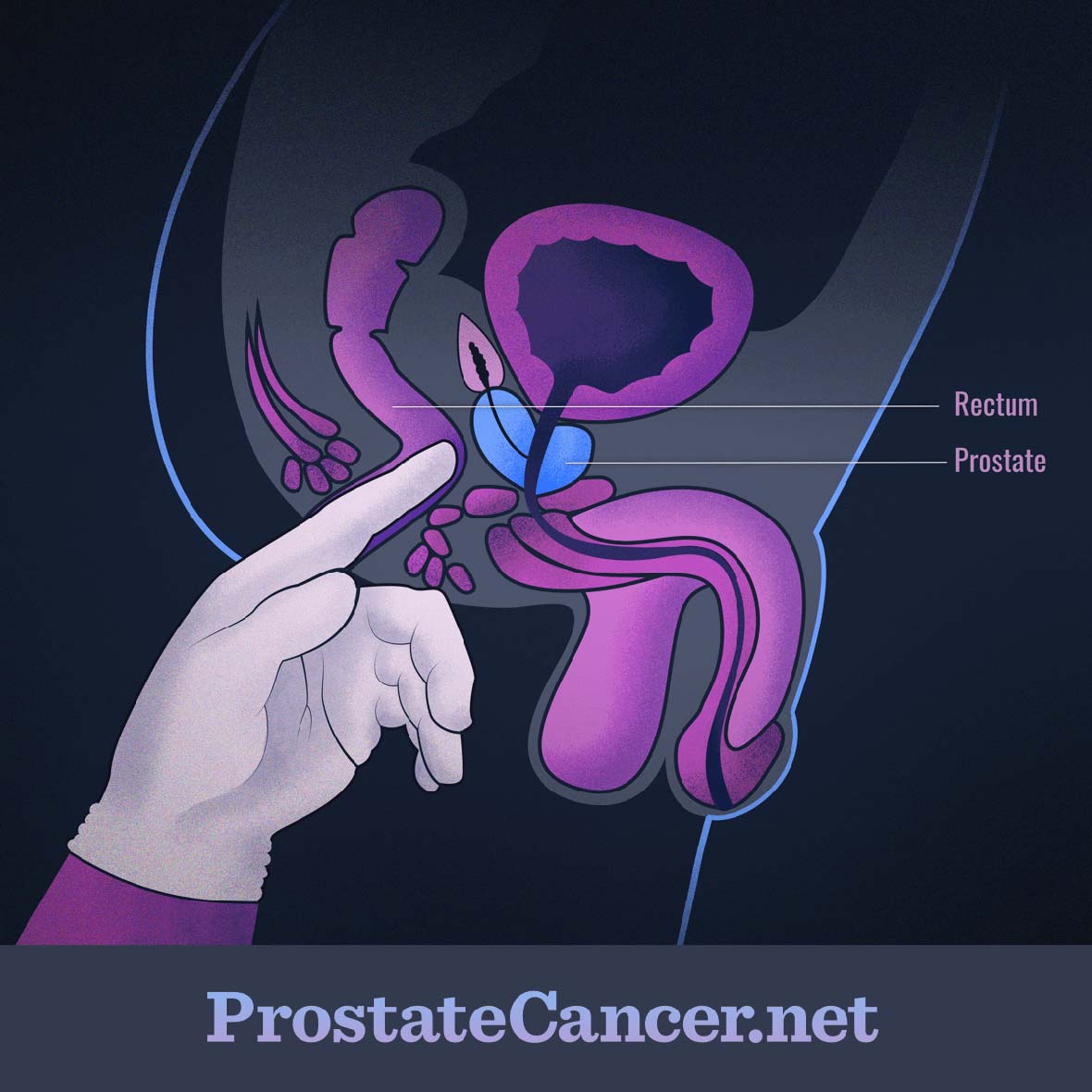 Who should be screened?

Over-diagnosis occurs in men who test positive for prostate cancer, however, their cancer is so slow-growing that it would never cause symptoms or death during the rest of their life. This is often the case for elderly men who are diagnosed, as many of these individuals may have only several years of remaining life expectancy, which would probably not be impacted by their cancer.2-5

When men are over-diagnosed, they can undergo treatment for prostate cancer and experience some of the undesirable side-effects. For example, some men may receive radical prostatectomies, radiation therapy, or hormonal therapy that can have long-lasting impacts on sexual functioning, fertility, and urinary incontinence. In this cases, over-diagnosed men can spend months, years, or more battling additional problems from a treatment they may have never needed in the first place.6 In some cases, men describe “treatment regret” or concerns over their prior treatment decisions based upon the fact that they were found to have a non-agressive form of prostate cancer.

Additionally, the PSA test may be impacted by other factors unrelated to prostate cancer, as discussed later on. In these cases, an individual could receive a false-positive result from their PSA test, and undergo an invasive prostate biopsy that shows they do not have cancer at all. In these instances, not only was the invasive biopsy not needed, but the individual with the false-positive PSA result may be left with psychological difficulties, including anxiety, that they still have prostate cancer.5

With all of this in mind, studies have been performed to determine if early or regular screening methods actually have a positive impact on prostate cancer diagnosis and management. After much research, the USPTF has concluded that for every 1,000 men between the ages of 55 and 69 screened over the past 13 years, 1-2 deaths and up to 3 cases of metastatic prostate cancer may have been prevented. For men over 70, there was no overall mortality benefit.3,4

Both the USPTF and the ACS agree that men over 70 do not need to be screened at regular intervals when they are asymptomatic, and men between the ages of 55-69 should make the decision with their doctor based on their individual desire to be screened as well as any potential risk factors including familial history, race, smoking status, and obesity, among others.2,4

The ACS recommends that conversations regarding preventative screening begin to happen between a man and his doctor around age 50, if he is at average risk and has a life expectancy of at least 10 more years, while men with one, or more, immediate family members who have had prostate cancer before age 65 may want to begin talking to their doctor earlier, around age 40 or 45. If a man does decide to receive regular preventative screening tests for prostate cancer, these may be performed every 1 year or less.2,6

Overall, preventative screening for prostate cancer, especially when a man is asymptomatic, should be made on a case by case basis, and may not need to occur as often.

Questions to ask about screening

Some sample questions to ask your doctor about prostate cancer screening include the following:

As mentioned before, there are two main screening tests for prostate cancer, the PSA test and the DRE.

PSA, or prostate-specific antigen, is a protein made by normal prostate cancer cells and cancerous cells in the prostate. When a man’s PSA level is higher than usual, it could be indicative of prostate cancer. The PSA test is not used as a diagnostic procedure, but can be used in combination with other screening methods, such as the digital rectal exam (DRE), to alert your provider of a potential problem. If your doctor suspects that you may have prostate cancer, they may recommend more invasive screening or diagnostic measures such as a transrectal ultrasound, a prostate biopsy, or other imaging techniques like MRIs or CT scans.

The definition of a normal PSA level may vary based on a variety of different factors. PSA levels are often measured in ng/mL (nanograms of PSA per milliliter of blood). Typically, a result of 4 ng/mL or lower (sometimes referred to as a PSA level of 4), is considered normal, but the cutoff point of when to act will be determined by your doctor. PSA levels can be affected by certain medications, benign prostatic hyperplasia (BPH—the non-cancerous growth of the prostate over time), diabetes, prostatitis (inflammation of the prostate), urinary tract infections, recent ejaculation, and more. Some doctors may prefer to take multiple PSA measurements over time before acting based on one high result, since there are so many factors that may affect your level.7,8

A DRE involves your doctor sticking a gloved, lubricated finger into your rectum as shown in Figure 1 above. During this exam, your healthcare provider will be checking for the feel of your prostate through the wall of your rectum in order to potentially detect any changes in size, texture, or shape of the prostate to determine if there are any potential cancerous masses. The DRE may also be used to screen for BPH (benign prostatic hyperplasia).9

Due to the inconsistent nature of the PSA test, and its inability to predict the aggressiveness or spread of prostate cancer, new investigational screening techniques are being researched. Some of these include looking at PSA levels in different ways, such as the free vs. total PSA test, the PSA density of transition zone, age-specific PSA reference ranges, or PSA velocity or doubling times.

Other exploratory methods include combining the PSA test with other biomarkers (indicators of cancerous processes going on in the body), including circulating tumor cells (CTCs) and microRNA biomarkers. Additionally, the Prostate Health Index and the 4K Score test are also under being studied as potential screening exams. More data needs to be analyzed before determining the efficacy of these screening tests. Your doctor will help you determine if a newer testing option is appropriate for you.10-12