People rarely realize the long-term impact of prostate cancer until it happens to them. Results from our 2019 In America survey revealed how prostate cancer and its side effects can have a lasting impact on quality of life and mental health, months and years after treatment is over.

How did you choose your treatment?

The top treatment decision factors were:

In addition to the standard treatments, people also incorporated alternative and/or adjunct therapies such as vitamins and supplements, erectile dysfunction drugs, and exercise into treatment. 62% reported feeling their prostate cancer was controlled on their current treatment plan. 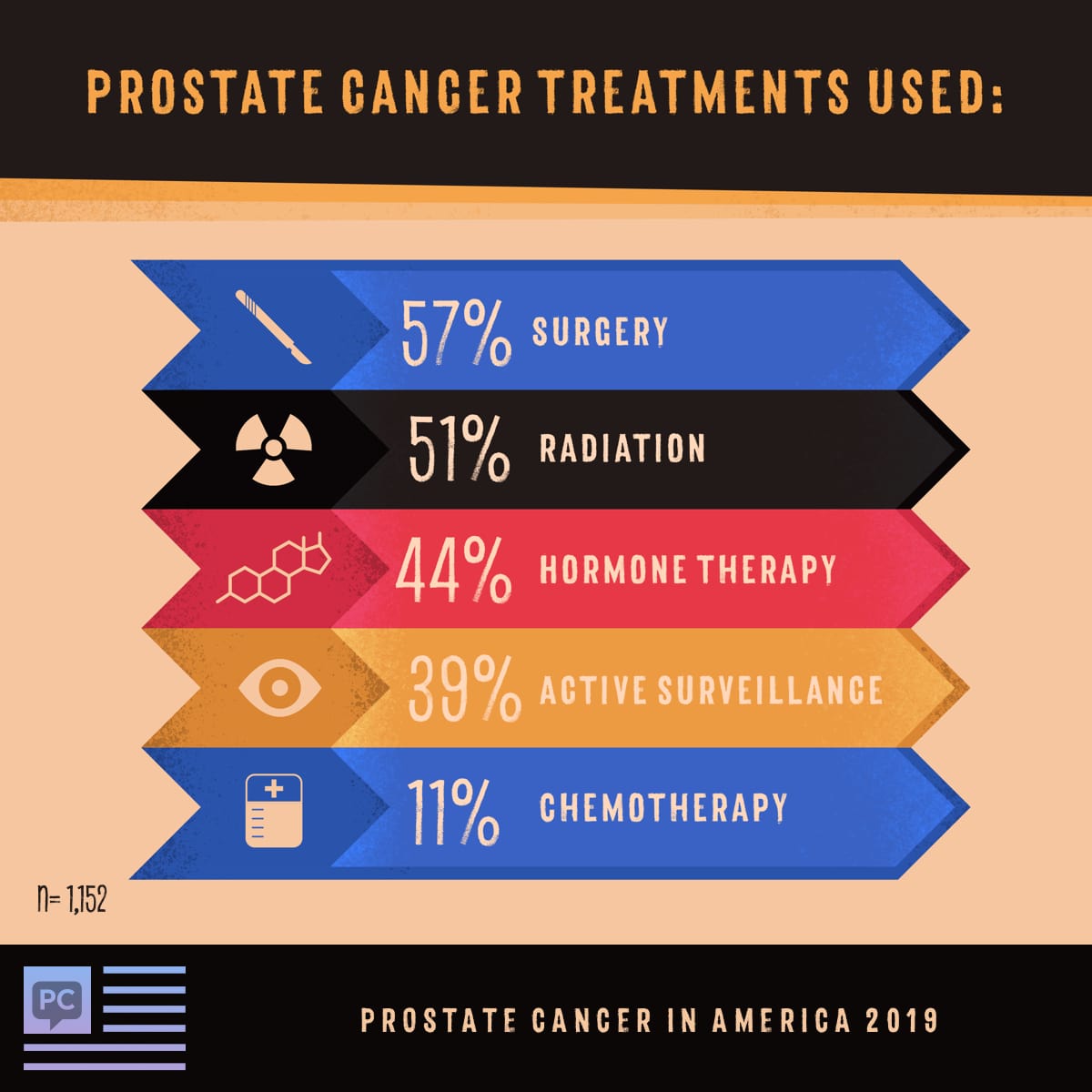 Treatment can take a heavy toll, both physically and emotionally. Even when the worst of treatment is over, side effects may persist. Many of the side effects people reported are discussed daily in the ProstateCancer.net community, especially sexual and urinary side effects and fatigue. 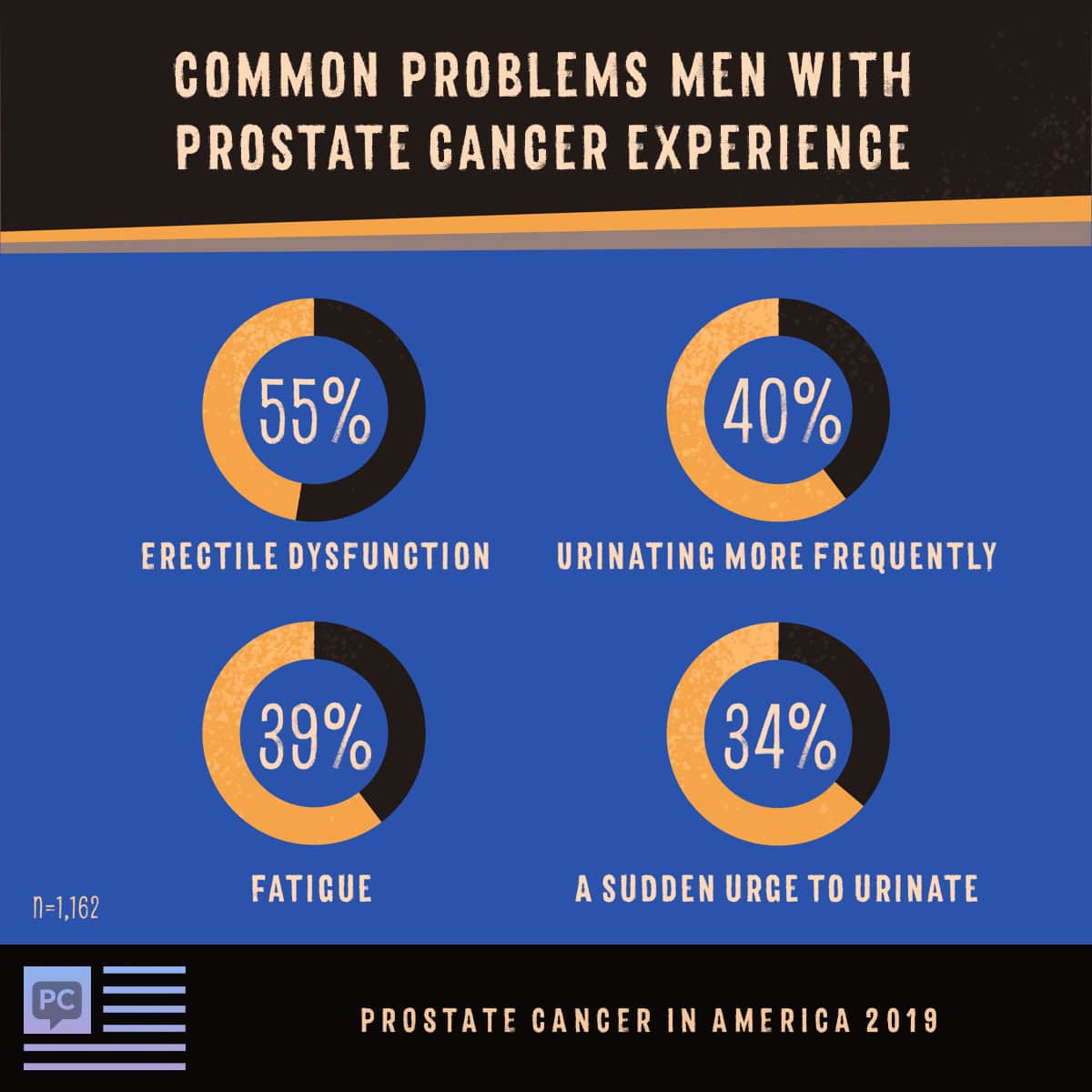 Changes in your sex life

Some of the most difficult side effects to confront are the ones that change your sexual health, and 84% of men said their prostate cancer affected their sexual health and intimacy.

From erectile dysfunction to leaking to libido, prostate cancer can make it difficult to stay confident and sexually active. It can also be stressful to figure out how to communicate with partners around symptoms and any lack of desire. 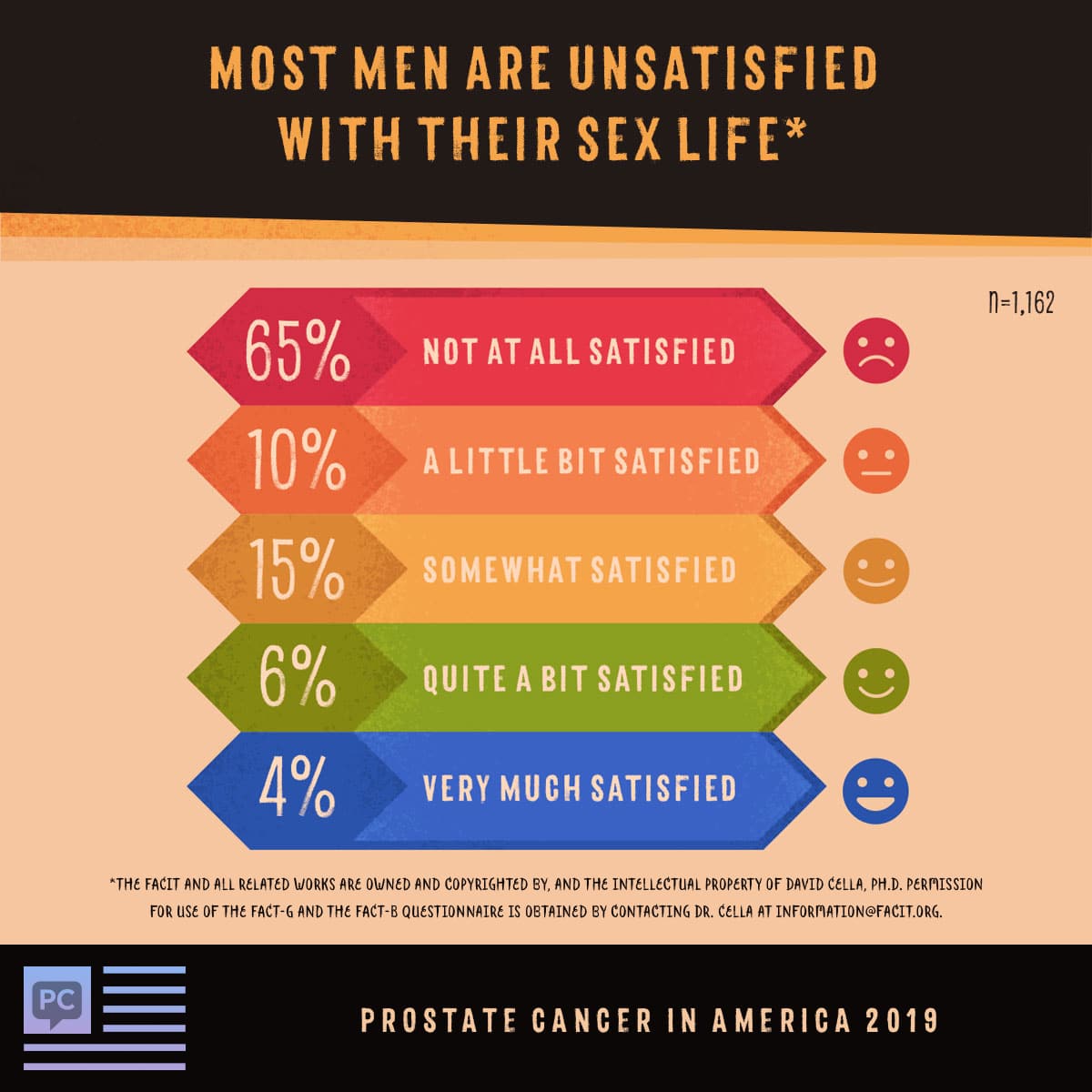 Will I regret my treatment choice?

Treatment regret can wreak havoc on mental health. While more than half said they do not experience treatment regret, those who do feel regret often express their frustrations in the community.

The biggest regrets around prostate cancer treatment included general side effects, erectile dysfunction, incontinence, impact on sex life, and having chosen radiation. Regrets also surfaced from being uninformed about side effects during the decision-making process. 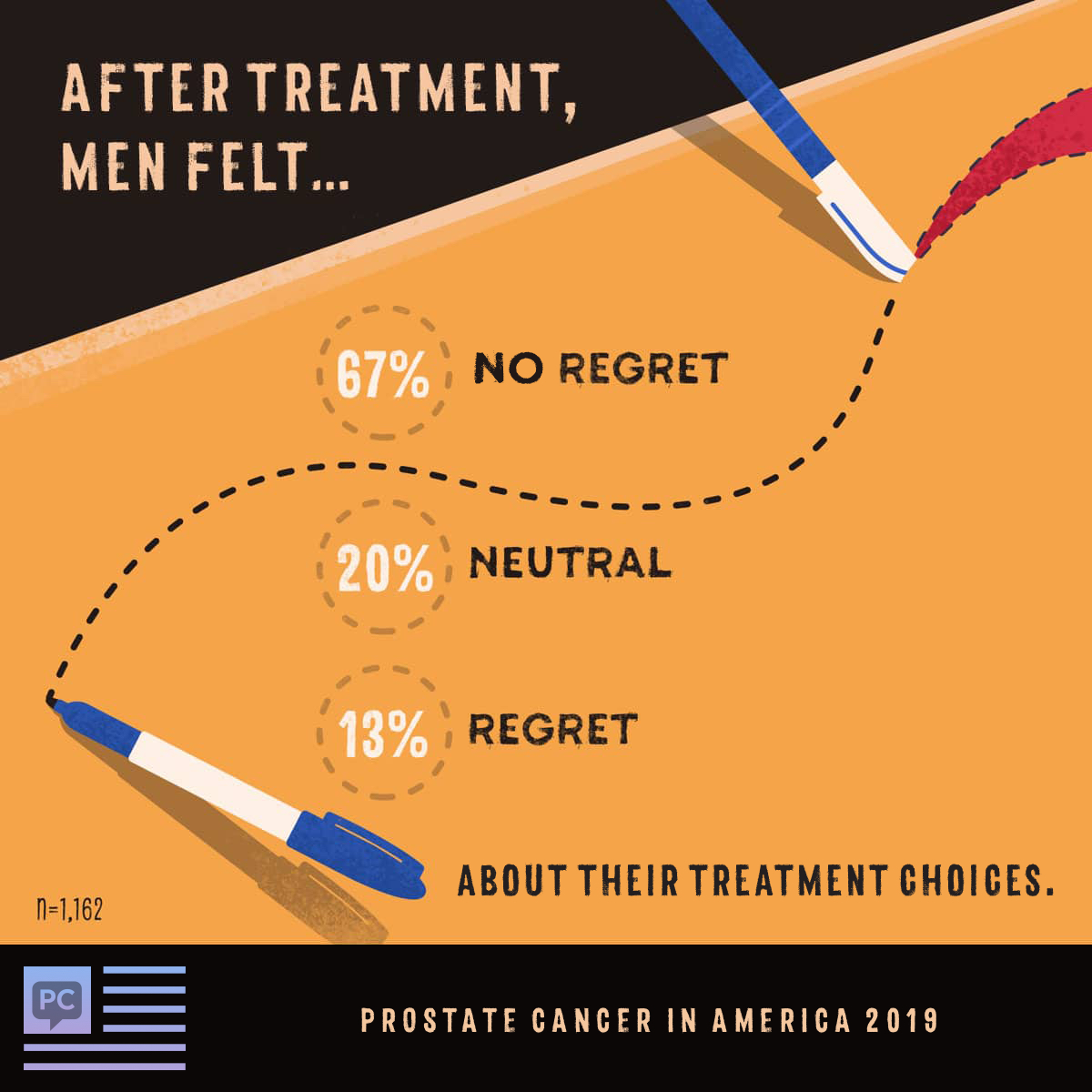 Self-esteem and confidence take a hit

Given the nature of prostate cancer side effects, it’s no surprise that self-esteem and confidence can take a hit. 48% of respondents’ self-esteem and confidence stayed the same, while 40% of respondents experienced a negative impact on their self-esteem. Those who felt the negative impact also expressed worrying about the future, experiencing depression, and not feeling like a “real man” anymore. 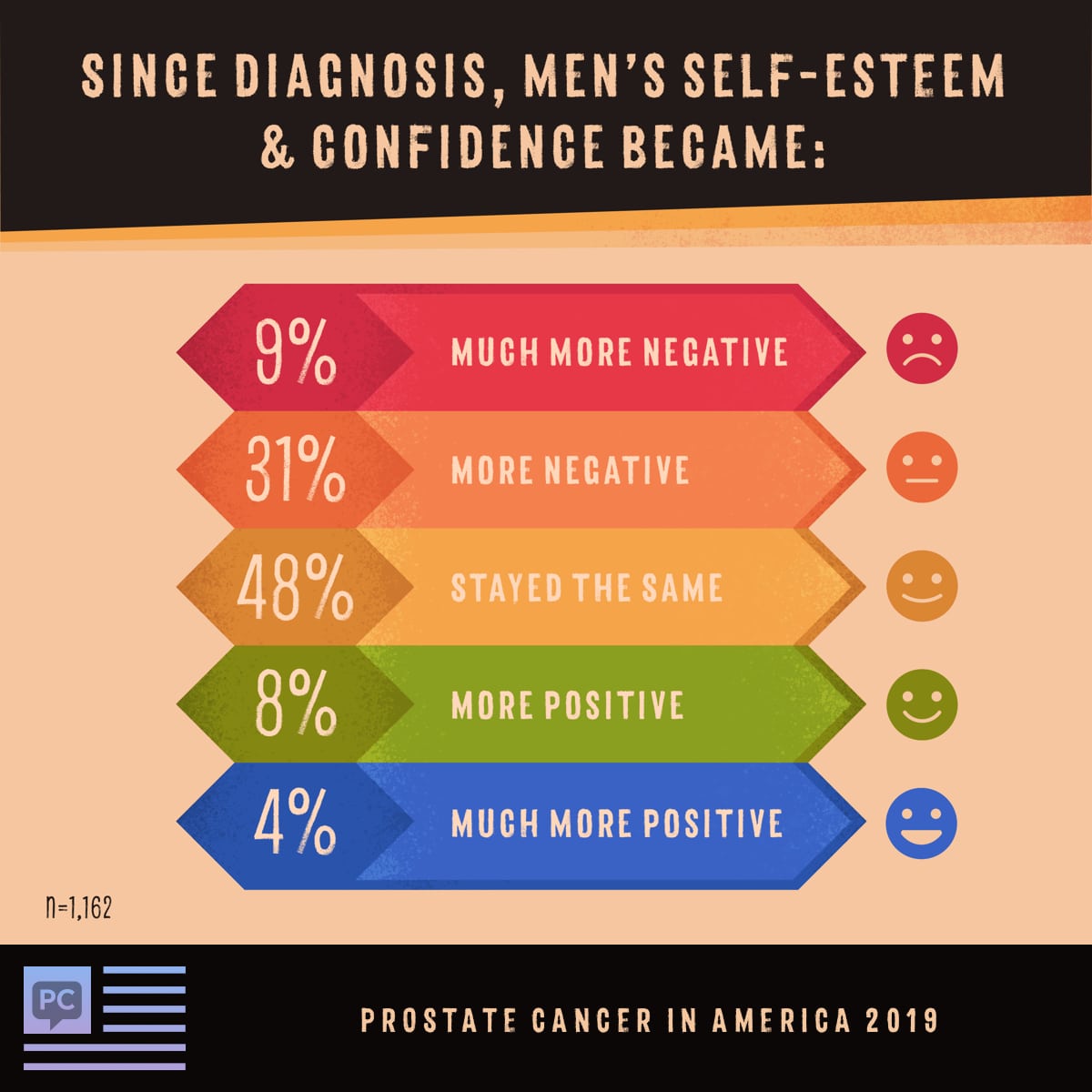 The power of hope and acceptance

Through the darkest times, many of our most dedicated community members remind us that there’s hope. Accepting a diagnosis looks different for each person, and it can be a powerful step to moving forward. 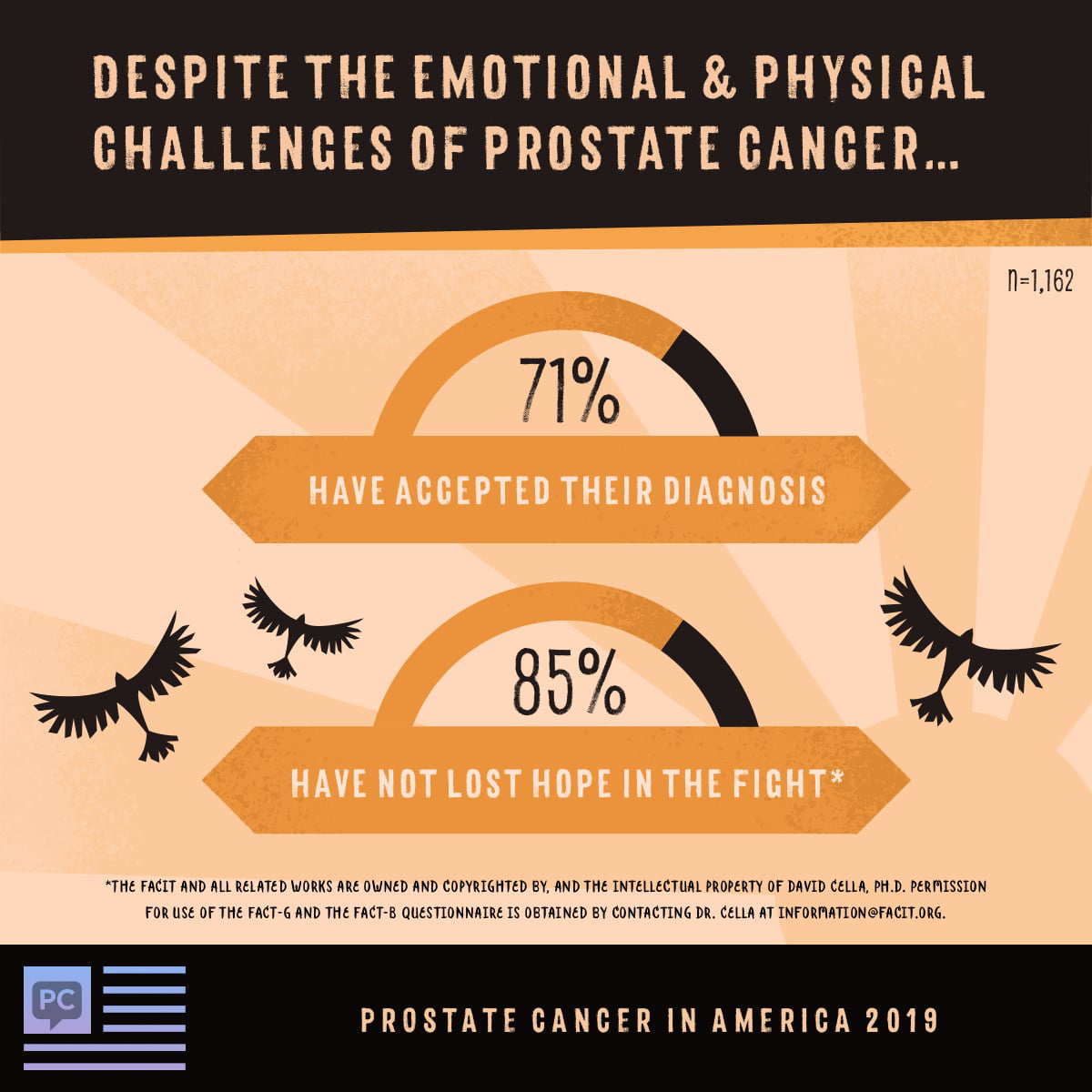 Prostate cancer doesn’t end with treatment. In many ways, it only just begins. The longer men live with the effects of prostate cancer, the harder it can be to cope with side effects, life changes, and find support.

The side effects of prostate cancer can far outlast the cancer itself. That’s why it’s important to prioritize your own care continuously no matter where you are in your journey.

How does your treatment journey compare? Tell your story.

The Prostate Cancer In America 2019 survey was conducted online from September 2018 through January of 2019. Of the 1,162 people who completed the survey, 1,162 were people who have been diagnosed with prostate cancer.

Community Views: The Worst Side Effects of Prostate Cancer

Prostate Cancer and My Coping Mechanisms

Please read our rules before commenting.

How familiar are you with inherited gene mutations and cancer?