This is Part II of Agent Orange: Our Second Vietnam Battle for Life.

What can we as Vietnam vets do to increase our chances of defeating prostate cancer?

My station in Vietnam

And we who were stationed near the perimeter of Chu Lai used to joke about the amount of dust created in the dry season by vehicles (and with the 690 times more TDCC sprayed than we should be exposed in a year that I mentioned in Part 1) I’m sure as we breathed in the dust, we were also getting plenty of TCDD and other dioxins that had been laying there for several years.

In fact, estimates indicate that while we were there the levels of TCDD in the soil and water were hundreds of times greater than what is considered safe by the U.S Environmental Protection Agency. Studies have shown that some Vietnam veterans who were exposed to AO had TCDD levels up to 600 ppt (parts per trillion) in lipid many years after they left Vietnam. When looking at the general population's levels, these values are approximately 1–2 ppt of TCDD. All people have some dioxins in them, but interestingly, it’s been shown that just slight increases above “normal” levels of dioxins can cause serious problems. In Vietnam, TCDD levels up to 1,000,000 ppt have been found in soil or sediment from AO-contaminated areas even 3–4 decades after spraying.13

Fast forwarding to the present and thanks to the Vietnam Veterans of American, American Legion, and others, AO is now considered by the VA to cause 14 different health problems, including prostate cancer.

Comparing those exposed and not exposed

And finally, the VA in Portland, Oregon did an excellent clinical study of those of us who got to see the rice paddies and sniff AO versus Vietnam-era vets who never went over12. The results were fascinating — and demoralizing. Those vets who got to sniff the AO have a 75% greater chance of getting the upper grades of PCa (Gleason 7-10) (I had a Gleason 9), which are the most aggressive and deadliest forms of PCa, compared to the Vietnam-era vets who didn’t get to sniff it.

When I first saw this study, I had two questions—(1) if AO is so carcinogenic, why are we getting prostate cancer about the same age as those who didn’t go over, and (2) why is it more aggressive when we get it?

First, there is a strong indication that, based on its effects in animal studies, TCDD is considered a tumor promoter, not a tumor initiator6. That means it doesn’t actually cause cancer, but rather, when we get our first cancer cell (and we all get cancer cells in our lifetime), it makes the cancer grow quicker, which would lead to both the facts:

Advice to my fellow Vietnam brothers

So if you went to Nam, please, please get your PSA checked regularly (at least once a year) by a urologist, not a primary care physician. Most of us are in the average age of getting PCa, which is 66 (“average” means 50% of those getting PCa are older than 66). I was one month short of 69 when the PCa bomb was dropped on me.

If you do get PCa, file for VA disability and form a battle plan with your urologist to attack it. My primary PCa was the most aggressive form; it was caught by a rapidly rising PSA (it went from 0.6 to 2.6, which is well below the PSA “standard” of 4.0 or less, in two years) just as it had started to metastasize (I shudder to think where I’d be today if it was caught a year or more later); and with a prostatectomy first and radiation two years later, it has been 3 years since my last detectable PSA.

And please don’t buy into that fairytale that guys who haven’t had PCa yet only need to have their PSA tested between ages 55 and 70. We’ve had too many guys on ProstateCancer.net, and I know a few others, report they weren’t diagnosed with it until their 70’s and early 80’s.

One plea to all veterans — what’s now known as the Blue Water Navy, which was the Navy personnel aboard various Navy ships stationed off Vietnam in the South China Sea, have been denied VA disability for AO. Meanwhile, the Australian government has acknowledged that their ship filtration systems for making the sea water drinkable, didn’t filter out AO (nor did ours). The sprayed AO ran freely out to the ocean in the runoff water, and the Australian sailors are getting disability from the Aussie government.

But the VA continues to deny benefits to our sailors for AO health conditions. While the House has very recently passed a bill giving them VA health benefits, it’s not guaranteed it will become law. So I plead with every veteran, no matter what branch of service you were in (I was in the Army) nor when you served, get involved with the Blue Water Navy Association by signing their petitions, writing Congress, or anything else you can do to help our fellow Navy Vietnam vets who have been ignored for way too long.

Finally, there is a statue of the Ultimate Weapon at Fort Dix, NJ which I couldn’t agree with more. But please fast forward to today and the Ultimate Weapon for your health is YOU. No one knows your body and its symptoms like you do, so you must discuss any concerns with your physicians. 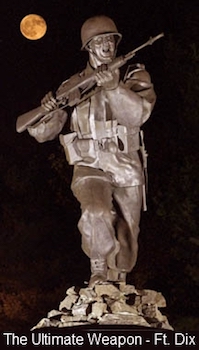 On 6/12/18, I woke up with extreme dizziness and, somewhat reluctantly, I went to our local VA clinic to have them check it out. Less than a half hour later I was in an ambulance, and about 4 hours later had an emergency craniotomy (brain surgery) that, per my neurosurgeon, likely saved my life.

So don’t be afraid of being embarrassed because after the emergency room’s exam you’re okay — I would have loved that diagnosis. So just like we used the military resources available in Nam to fight Charlie, look in the mirror and tell that guy you see there that just as you did in Nam against Charlie, aggressively use the medical resources available to fight prostate cancer. Be diligent about the other 13 diseases caused by Agent Orange as well as the other health conditions we are all beginning to get as we enter our 70’s. A lot, if diagnosed early enough, are beatable, and at least controllable.

20 comments
This article represents the opinions, thoughts, and experiences of the author; none of this content has been paid for by any advertiser. The ProstateCancer.net team does not recommend or endorse any products or treatments discussed herein. Learn more about how we maintain editorial integrity here.