Even the Healthiest Men Get Prostate Cancer

When I was diagnosed with prostate cancer it didn’t come as a complete surprise. Besides me, three of my five siblings had cancer, including my brother Richie who also had prostate cancer. My five siblings and I grew up in Brooklyn, and I never left. In fact, I moved nine blocks from the house I was raised into the house I live in now with my wife, Louise, of 47 years.

My family history with cancer

Only my sister Elena and I are cancer survivors. Sadly, our other siblings have passed away. So this dreaded disease runs in our family. But I’ve been very diligent about maintaining good health by exercising daily and eating right. Up until I had a hip replacement, I was running on the treadmill for 60 to 90 minutes every day. I turned 80 in June 2021 and haven’t even had the flu since 2000. My strong faith and attending mass every morning has also kept my health in check.

My symptoms started with a PSA score that kept rising, starting out at 2.5, which is in the normal range. My urologist, Dr. Ben Jacobs, sent me for an MRI in January 2020, just before we all went into pandemic lockdown. Dr. Jacobs spotted something suspicious and referred me to Dr. David Silver at Maimonides Medical Center, one of the three major hospitals in Brooklyn.

Dr. Silver scheduled me for a biopsy and the results showed a Stage 1 tumor. Luckily the cancer hadn’t spread and he reassured me that prostate cancer is slow growing, which was fortunate since all elective procedures were put on hold while the hospital was treating only Covid-19 patients. So I could delay treatment for several months, although not indefinitely.

In January 2021 Dr. Silver sent me for a second MRI after my PSA score jumped to 5.6, and now it was time to treat the cancer. That’s when he told me about HIFU, which stands for high-intensity focused ultrasound. Dr. Silver was one of the few doctors who does this procedure, and the only one in Brooklyn. He said that HIFU is ideal for patients whose prostate cancer is still confined to the prostate, which mine was.

Dr. Silver explained that with HIFU he is able to destroy only the diseased portion of the prostate, which means that side effects like urinary incontinence and sexual function are less likely to occur. HIFU is done quickly (approximately two to three hours), in a single session and at an outpatient surgery center, away from the main hospital, so I could get in and out quickly, and avoid any risk of contracting Covid. Dr. Silver told me HIFU has really increased in popularity, especially during this pandemic, and patients are asking for this because they’ve heard that they can come in the morning, have the procedure and go home before lunch.

My thoughts about radiation

I had thought about radiation. My brother Pete had kidney cancer which metastasized. He had radiation and it really just put him under. My other brother Richie had brachytherapy for his prostate cancer. This involves planting radioactive seeds in the prostate. He also really suffered. After my daughter researched both HIFU and radiation, and encouraged me to go with HIFU, I made my decision. Also, as of January 1, 2021, HIFU was being covered by Medicare (and most private insurers.) Of the entire bill, I only had to pay the $500 deductible charge.

I had no pain after the HIFU procedure, which took about 90 minutes. Recovery was fine although I did have to have a catheter put in for four days and then I had to have it taken out during a major snowstorm! I’ve been able to return to the things I enjoy, taking long drives with Louise, shopping for nice accent pieces for our home, eating dinner at our favorite restaurants, and providing daily companionship and care to a family friend. And soon I hope to return to the gym.

My experience is recommended

I would recommend HIFU to anyone looking at treatment for prostate cancer. It’s like you’re waiting for something to go wrong but nothing did! It’s been fantastic. I’d rather have HIFU than go to the dentist! 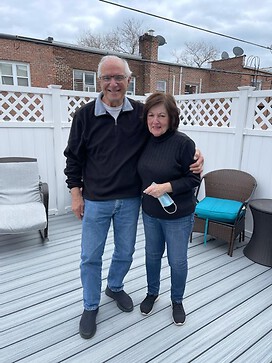 A (Long) Day in the Life of a Prostate Cancer Patient

2 comments
This article represents the opinions, thoughts, and experiences of the author; none of this content has been paid for by any advertiser. The ProstateCancer.net team does not recommend or endorse any products or treatments discussed herein. Learn more about how we maintain editorial integrity here.