What Is Radical Prostatectomy?

How does it affect prostate cancer?

Radical prostatectomy is the main surgical procedure performed for prostate cancer and is the only surgery performed with the intention to cure. When a case of prostate cancer is detected and treated before it has spread beyond the prostate gland, the cancer, as well as the entire prostate gland can be removed, thus, eradicating the cancer. During a radical prostatectomy, the entire prostate gland is taken out, as well as the seminal vesicles (the glands that secrete fluid that will eventually become part of the semen) and other surrounding tissue. In some cases, local lymph nodes may also be removed during a radical prostatectomy, if it is determined that the cancer has spread to these nodes and that it hasn’t advanced further.

An individual who undergoes a radical prostatectomy will have subsequent follow-up appointments with their surgeon post-procedure, typically starting within a few weeks after the surgery. At these follow-up appointments, blood tests and other scans may be performed to determine if the cancer was completely removed, and to monitor for its potential return. There are two main types of radical prostatectomy: open surgery and minimally invasive laparoscopic surgery.2-4

Open radical prostatectomies are performed less often than their minimally invasive counterparts. Open surgery involves making one long incision into the body, and typically leads to longer recovery times, more blood loss, and a longer hospital stay than minimally invasive (laparoscopic) prostatectomies. There are two approaches that can be taken when performing an open radical prostatectomy: radical retropubic prostatectomy and radical perineal prostatectomy. The retropubic approach involves making an incision from the belly button down to the pubic bone, while the perineal approach requires an incision between the scrotum and the anus. 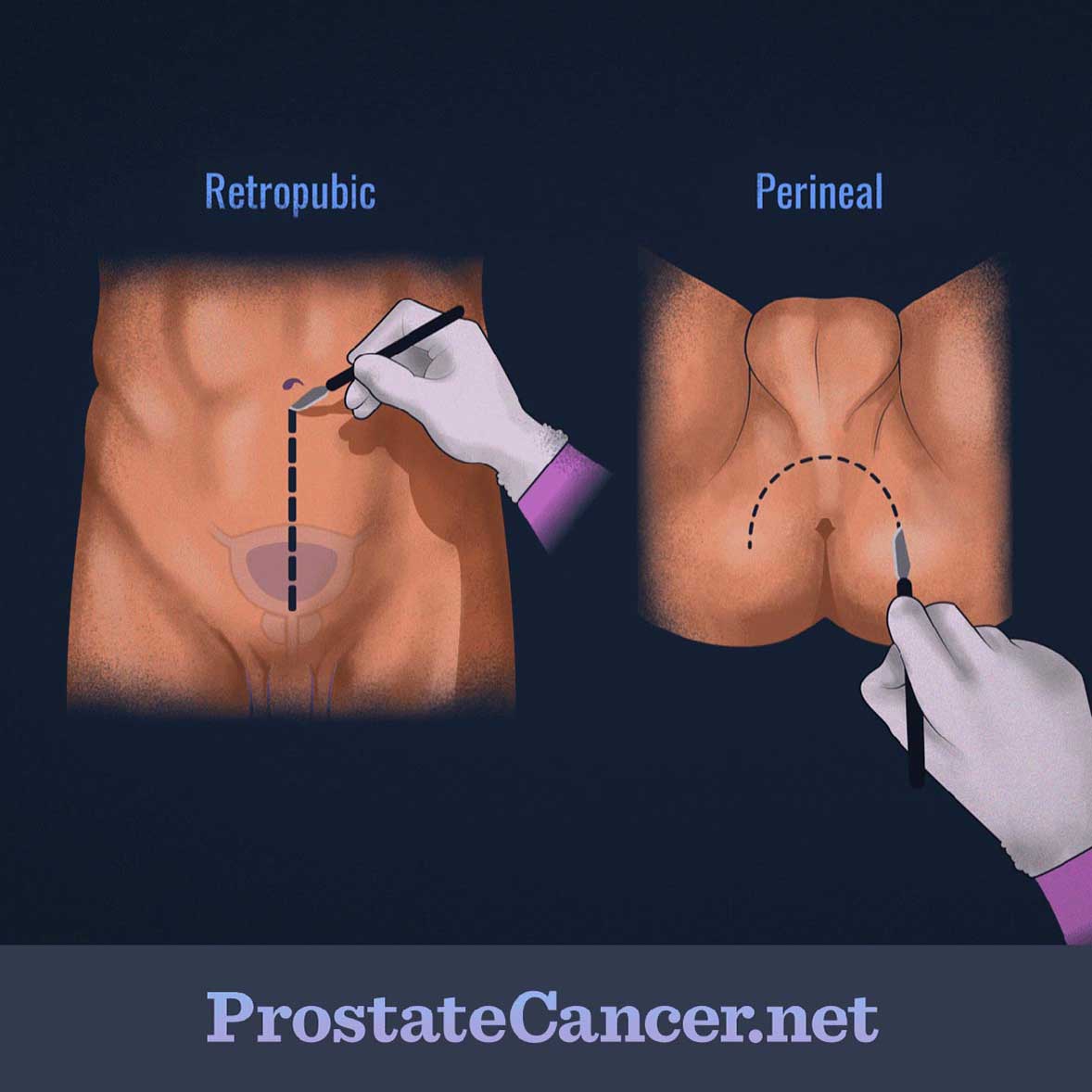 Although the recovery is typically shorter for the perineal approach, it is used less often than the retropubic approach since it’s harder to remove any local lymph nodes and there’s a greater chance of having erectile dysfunction issues post-surgery. However, the perineal approach may still be used when the retropubic approach is not possible or is a riskier option for a specific individual. After either approach, a catheter will remain in place for one to two weeks to help drain the bladder. General anesthesia will typically be used during the procedure.1,5

Minimally invasive radical prostatectomy is a newer type of prostate cancer surgery that has arisen as a result of many technological and imaging advances. Several smaller incisions are made into the body and long surgical tools are navigated inside. One of these tools acts as a video camera while the others act as the normal surgical instruments. The surgeon can either be manually guiding these tools during the procedure, or can use a control panel to guide robotic arms. In either instance, the success of the procedure is tied greatly to the surgeon’s level of skill, both in manually guiding the tools, or in navigating the robot’s control panel efficiently and effectively. Anesthesia will be used during the procedure as well.

Since both manual and robot-assisted laparoscopic prostatectomies are fairly newer techniques, more research needs to be performed to determine their long-term effects. Research thus far has indicated that these minimally invasive techniques lead to shorter hospital stays, less pain, faster recovery, and similar side effects when compared to open procedures. Recovery of full bladder functioning may take longer after a laparoscopic prostatectomy than an open prostatectomy, but further research needs to be completed. A catheter will be put in place for the same purpose as open surgery.1,4,6

Risks and side effects of the procedure

The major side effects of the procedure include:

What Is the Social Health Network?