What is Prostate Cancer?

The prostate gland is part of the male reproductive system and makes a clear to white-colored fluid that mixes with sperm produced in the testes to eventually become semen. The prostate is located below the bladder and behind the pubic bone near the base of the penis and sits in front of the rectum.

The figure below illustrates the location of the prostate gland (shown in blue) as well as the areas where the cancer from the prostate may grow. The primary tumor may grow through the wall of the prostate and spread to nearby organs identified in the diagram, or metastisize to lymph nodes or bones. 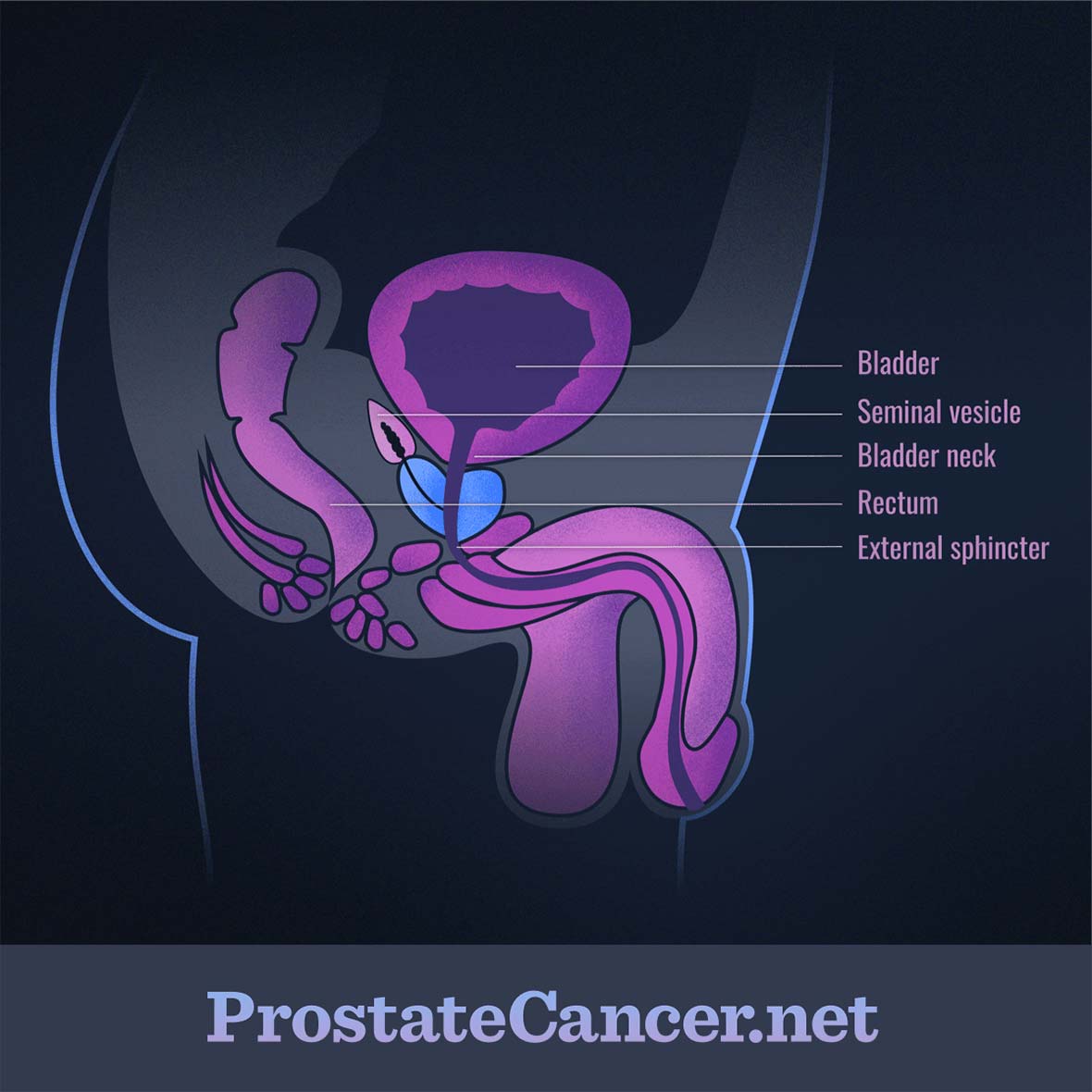 As of 2016, there are over 3 million men living with prostate cancer in the United States alone.1 The majority of prostate cancer cases are classified as being “localized” to the prostate, and nearly all cases are considered adenocarcinomas, meaning the cancer develops in the cells lining the gland. Prostate cancer is the most common cancer in American men, after skin cancer.2

Who gets prostate cancer?

African American men have the highest incidence rate of prostate cancer, and the condition typically affects non-Hispanic men more than Hispanic men. Improvements in screening methods, such as new imaging techniques and the use of the prostate-specific antigen (PSA) test, have allowed for earlier detection of prostate cancer, which is why most cases are found early on.1-3

Symptoms and detection of prostate cancer

Depending on your age and family history of prostate cancer, your doctor will determine when it is appropriate for you to start receiving prostate cancer screenings. Very early prostate cancer rarely shows symptoms, and is often suspected after abnormal PSA tests or digital rectal exams (DREs). When an abnormal result is found during a routine screening, further diagnostic testing may be completed, such as biopsies to further classify suspicious cells, or images like MRIs. Prostate cancer does eventually start showing symptoms, with the most common being:

Once a prostate cancer diagnosis has been suspected or confirmed, your provider will help you choose the most appropriate treatment method for your situation.

Prostate cancer is caused by uncontrolled cell growth leading to the development of tumors. The exact mechanism responsible for prostate cancer is unknown, and could be due to multiple issues or mutations present in an individual’s genes or cells. Normally, cells divide at an appropriate pace, and perform “damage checks” to make sure that newly formed cells are healthy. When cancerous mutations are present, these checks do not happen, and tumors are formed when unhealthy cells are allowed to keep growing and dividing. This is the cause of cancers like prostate cancer.

The good news for individuals with prostate cancer is that the condition is typically caught early on, thanks to advances in screening techniques and imaging capabilities. The five-year survival rate for local and regional prostate cancer (roughly stages I-III and potentially IV if the cancer hasn’t spread too far beyond the prostate) is nearly 100%. Estimates for the 10-year and 15-year survival rates of individuals in this group are also high, and are both estimated to be above 90%.

These statistics decrease for those who are diagnosed with very advanced or distant prostate cancer that has spread to far away lymph nodes, bones, and other organs. Individuals in this category have a five-year survival rate of roughly 30.5%. As of 2016, the death rate for prostate cancer-related mortality has reached its lowest, at of 19.2 deaths per every 100,000 men of all demographics in the United States.6,7

There are many treatment options for prostate cancer, including radiation, surgery, chemotherapy, and hormone therapy, among others. Treatment decisions will be based on the stage and grade of the cancer, an individual’s age and expected lifespan, other medical conditions that are present, potential side effects, and an individual’s desire to treat.

In many instances, when the cancer is caught early and is suspected to be non-aggressive, active surveillance or watchful waiting of the cancer may be an option as opposed to intense treatment options with potential side effects. Your provider will work with you to determine what options are best for you, and the most applicable to your situation.