Participating in a Clinical Trial – Part 3

Unlike parts 1 and 2 of this series, I’ll be writing part 3 in the past tense as it was really difficult for me to concentrate enough while going through chemo to be able to write. I did, however, occasionally take notes so I wouldn’t forget things I’d want to write about later.

Before I could start treatment, I had to get a port (aka port-a-cath). Instead of trying to explain it myself, I’ll just let the NCI do it for me in the picture below. 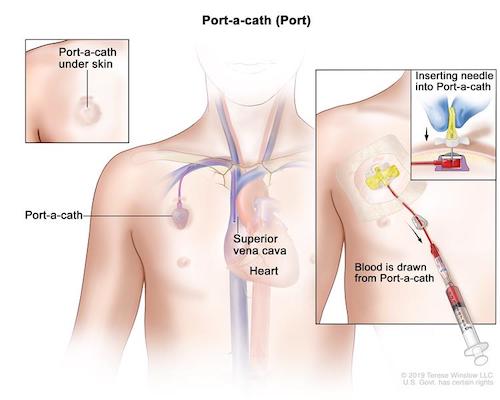 Getting my port put in

I went to a different facility to get my port put in. While I prefer going to the cancer center’s main campus, going to another location was fine with me for things that weren’t directly related to my treatment. I had to be there early – it was still dark and the moon shone brightly over the building when I got there – but you get used to these things after a while.

I do remember talking about pets with the doctor and nurses who were prepping me, and then the next thing I remember was coming to in my recovery room. At that point, I felt pretty loopy. Really loopy. I ended up talking the attendant into rolling my wheelchair to the coffee shop before I left. And I remember absolutely nothing about the conversation other than I laughed a lot. I wonder if she did?

At last, the treatment

With my new shiny power port in place (My second one, actually. We had my first one removed after finishing my first round of chemo several months earlier.) it was time to start the treatment. I started taking the Zytiga the same day I started chemo. By that time I kind of felt that chemo was old hat, and I found that there really wasn’t much difference from my previous round of chemo a year earlier.

There was nothing different about labs. The nurse would draw blood through my port and have it sent to the lab to see if I was physically able to have chemo. In general, that meant they had to check if my white blood cell and platelet counts were good. One side effect of treatment is low blood counts, so it’s required to have it checked before each treatment.

It’s tough if you can’t have treatment because you tend to prepare yourself mentally for treatment day and to have it canceled mid-stream is a bit jarring and somewhat of a letdown, plus you have to reschedule. Fortunately, this never happened to me. Those results would be in by the time I went to see the oncologist, which sometimes was only a half hour to 45 minutes later. I always got my PSA results the same day, often while I was sitting in the treatment room.

Meeting with the oncologist

Meeting with my oncologist was nice and I always looked forward to it. She would graciously take the time needed to answer any questions I had and she had an excellent bedside manner. Since this was my second round of chemo (one round of chemo will consist of multiple cycles of treatments) I didn’t have too many questions. The main differences were that I had been through treatment before, had my PSA come down considerably and then have it start to go back up, and this time I was on a clinical trial.

After meeting with my oncologist, I would then meet with the clinical trial coordinator to discuss how things were going. Part of the trial was that I had to keep a “pill diary,” writing down when I took my meds (prednisone and Zytiga) each day. After that, I would head up to the treatment floor.

Welcome to the treatment room

At the cancer center, I went to, the treatment area consisted of several cubicle-like “rooms,” but with taller walls, so you had some sense of privacy. Treatment was made up of two parts: premeds and the treatment itself. Premeds consisted of a small regimen of medications primarily used to avert side effects and allergic reactions. I recall that mine contained dexamethasone, Benadryl, and one or two others I don’t recall.

One thing that was different with the second round of chemo compared to the first was the Benadryl. Benadryl would make me sleepy, and sometimes I slept throughout the entire treatment. Premeds took about 30 minutes total and the chemo took approximately two hours. The premeds and chemo drugs were all administered through my port.

I always brought a book and my smartphone for something to do in case I didn’t fall asleep. If you have treatment mid-day, they may offer you lunch (probably a sack lunch) if you want it. There was a grocery store across the street, so I usually bought myself a treat, and that was almost always a slice of pumpkin pie.

Next time in part 4, I’ll cover what happened in the three-week periods between treatments – side effects, work, why it’s a good idea to take precautions while your immune system is compromised, and more.

Editor’s Note: We are extremely saddened to say that on September 19, 2021, Doug Sparling passed away. Doug’s advocacy efforts and writing continue to reach many. He will be deeply missed.

Stalked by a Stealthy Cancer, Part 1

A (Long) Day in the Life of a Prostate Cancer Patient

5 comments
This article represents the opinions, thoughts, and experiences of the author; none of this content has been paid for by any advertiser. The ProstateCancer.net team does not recommend or endorse any products or treatments discussed herein. Learn more about how we maintain editorial integrity here.

Are you intimate after prostate cancer treatment?