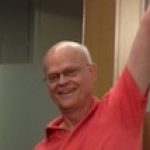 Okay, I now know I have rather severe prostate cancer (PC), and in both my mind and my urologist’s mind, a robotic (Da Vinci) radical prostatectomy is the only answer (I had open heart surgery to replace my aortic valve 7 years before all this, and I DO NOT want anyone opening me up with a scalpel ever again if there’s a viable alternative). And if you’re like me, waiting under these conditions is not what I like to do. Let’s get it over NOW!

But a key factor is that they wait a little over 30 days after you’ve had a biopsy to do the surgery so all the swelling and inflammation in the prostate from the biopsy is gone. So 6/5/13 was the next available date I could have the surgery at Penn, and it was scheduled.

Of course, there’s the mandatory meeting with the surgeon who, as I mentioned earlier, asked what I wanted from the surgery—“get the cancer!”

A small physiology lesson I was unaware of when all this started. Guys, we have two nerve bundles near the prostate gland, and they are what allow us to have an erection. And my surgeon said that due to the severity of the cancer, i.e., a Gleason 8, we couldn’t take a chance that some of the cancer wasn’t also in one or both nerve bundles, so the nerve bundles had to come out. He was nice enough not to say it, but I will–goodbye erections!

And a small side story that’s relevant to all this. Mid-May, about two weeks before the surgery, I had lunch with the Executive Director for the Alzheimer’s Association for South Jersey for which I did and do a lot of volunteer work. And at lunch I told her about my cancer, but I also said I was glad it was cancer rather than Alzheimer’s because there’s a fighting chance they can get the cancer, but there’s no chance with Alzheimer’s. And Linda said she had heard that same thought from others fighting cancer before.

Patient or caregiver, sharing the journey

And June 5th arrives, and Patti and I make the roughly 75 minute drive to HUP (Hospital of the University of Pennsylvania, which I usually refer to as just Penn). And as we’re walking up to the front door of HUP, Patti said, “I wish I was the patient and not you!” And I respond that I’m glad it’s the way it is as she had had a bunionectomy 11 years before, and I can attest it’s easier being the patient than the caregiver.

And the other good news is my daughter, a physician, wasn’t there as she was for the open heart surgery in case a “major decision” had to be made such as life support or no life support (happy to say that decision didn’t have to be made during nor following my heart surgery). In other words, a prostatectomy is a relatively safe surgical procedure.

So up the elevator we go; I’m checked in; and we kiss goodbye until I’m in recovery.